Blogging from Down Under

I haven’t blogged in while (*coughs * 10 months) Yeeees, I know your lives have been on hold waiting for the next instalment of my  awesome Aussie life – well you can get moving again people because I am back . . . .

Sorta- Hell, I’m not even going to try and fill you in on the last almost year. We’ll just sweep that under the carpet and let’s all move on shall we? Cool?  . . .Cool!

So some of you avid theonlywayismelbourne followers (mum), will know that since moving Down Under I have embarked on a whole new career. Yup, since qualifying as a Personal Trainer (I think it deserves capitals) last year, I can now call myself a ‘Fitness Professional’  WOOP!

Given that I am now a fitness professional, there is a requirement of continual education in order to stay on top of new industry standards, research etc and I attended one of these a couple of days ago. . .  I haven’t been able to bring myself to write about it until now however – for shame.

The course itself was fine – awesome in fact.

It was the journey to the course that I am taking about (not the spiritual ‘I’ve been on such a journey’ ) but the actual physical journey.

Now since being in Australia I’ve never had cause to head into the city in rush hour. So I’ve always been under the impression that it is nothing like my horrendous journeys to work when I was living in London. 8am trying to extricate your head out of someone’s smelly armpit on the tube was never my idea of fun. Melbourne, I thought,  will be a whole lot different, an overground train, more refined and; Australia is massive so obviously less people and lots of seats available – obviously!

I arrived at the station to be met with a mass of people 6ft deep, waiting to get on the train. 1 train was missed as there were too many people so I wait patiently inching my way forward ready for the next one. The next one comes – boom I’m on baby. . .

Well,  I’m on but my backpack? . . .  not so much. (note to self take backpack off back prior to boarding the train to avoid a mild strangulation emergency door alarm on the train situation – yes that was me sorry!) you’d think the doors would just open and let me pull my bag in and off we go on our merry way – you’d think wouldn’t you.

You see, the train doors are this weird half electric half manual doors so instead of the doors opening and me pulling my bag inside, the doors closing and us being on our way, instead there took 3 men to manually yank the doors apart with the alarms going off and a million people armpit to cheek on the train being elbowed by the men trying to open the train doors with little old me – stuck in the middle completely unable to move until the chivalrous men freed me from my train door prison! Oops.

Anyhoo doors finally prised open, alarm stopped, me red faced, sweaty and embarrassed and the train continued on its journey. No more drama . . .

This is me of course there was drama.

So as we reach each station some people get off, more people get on and the train gets even busier. I somehow managed to find myself a little nook by the side of the door and a handy rail to hold on to. Relatively out of the way and no trouble to anyone.

The train stops at the next station, some people get off, more get on you know the drill and people squeeze against each other trying to make themselves as small and thin as they can to make room. They squeezed against everything, the windows, the doors, the chairs and the hand rails, the hand rails that I was holding on to at precisely chest height. A rather ample lady had managed to squeeze herself onto the train and her ample bosom was now pressed rather snugly right onto my hand! I won’t lie it was uncomfortable. So,  how to deal with this thought I,

A) To style it out – never make eye contact and pretend all is normal until I can get the hell off the train and wash my breasty hand?

B) To politely tap her with my free hand “excuse me madam I don’t know if you have realised but, funny story, I appear to be feeling you up”

So I figured, as the train moved and people shifted about for better positions I would, as surreptitiously as possible, slowly, slowly millimetre by millimetre; attempt to move my hand, just enough that I wasn’t copping a feel.

So it began, and as we started to move it was almost as though she was aware that my hand was on her breast as she shifted slightly to allow me room to manoeuvre my hand 90 degrees to begin the achingly slow process of extrication.

Just as my hand turned, the train came to a screeching halt and threw everyone forward, including the lady who was so nearly free of my groping hand and over she fell, her right breast landing squarely in the palm of my upturned hand.

I could have honked and squeezed for the jolly japes you know but instead for the rest of the journey we travelled in silence, no eye contact just my hand holding on to her boob like I was about to milk it, everyone squashed together, literally unable to move my hand – there was no where to go, nowhere to hide just a lot of eye contact avoidance, and feigned nonchalance.

And then the journey ended, we exited the train and with one lingering glance breasty girl was gone and my hand was free!

Public transport is not for me. I’ll stick to driving!

WOAH, Steady on there Tiger!

Not that type of announcement!
REALLY!

NOOOOOOO! There is nothing baking in this oven I can assure you!

This is a different type of announcement, I’ll explain.

You may (or may not) note that I’ve been all over the place with my blogage over the last few months.

Hmm I may need to work on my witty banter then!

Anyway, the reason for this is because (all) my time, spare and not so spare,  has been taken up with studying. Yes I’ve been a studious student for the last year and everything else has fallen by the wayside as I got stuck in to studying for my Certificate III and Certificate IV in Fitness. It’s been a looong road and at times a very stressful and tiring one, but . . . . . I did it, I finally did it.

I am now a fully qualified Personal Trainer! Check it! 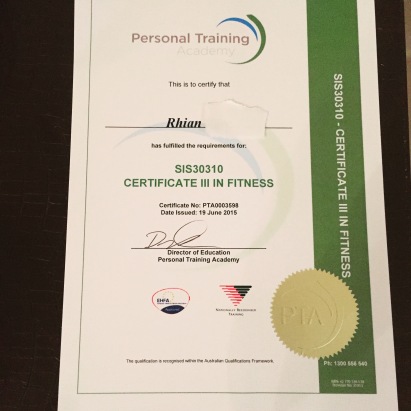 I am so ridonkulously happy and relieved to have finished and I am pretty proud of myself for pulling it off with 2 kids to look after. I was going to say, whilst also running a home,but given that I really didn’t quite pull that off we’ll stick with just looking after the kids! Hey, they are still alive, I count that as a win!

At times though I really did wonder what the hell I’d done and why on earth I’d started it, I mean who knew there was more to personal training than just shouting at your client to DROP DOWN AND GIVE ME 20?! (That’s a real question by the way!) Oh boy there is soooo much more to it and I wasn’t sure I would finish at times.

Well, that’s all fan-dabby-dosy isn’t it?!

Now that I’m not studying anymore I actually have to –  do Something!

Anyone out there in need of a Personal Trainer?????

Our recent holiday to New Zealand wasn’t just about skiing which is why we chose to stay in Queenstown – or QTown as the locals call it (actually I have no idea if they do but I like it! Welcome to QTooown said with an American accent!) I don’t know why I’m telling you this , this is a tangent let’s move on:-

As our 3 hour flight came into land at the tiny QT Airport (I’m abbreviating even more now, think I need to chill) the scenery we were greeted with, through the small window of the plane was absolutely breathtaking. END_OF_DOCUMENT_TOKEN_TO_BE_REPLACED

We have just returned from our very first family ski holiday to amazing New Zealand. It was everything that we imagined it to be and more besides. Such a stunning place.

END_OF_DOCUMENT_TOKEN_TO_BE_REPLACED

Winter in Melbs is a pretty grim affair, it is long and dark and cold, the Southern Hemisphere winter doesn’t have a whole lot going for it to be perfectly honest.

Now winter in the Northern Hemisphere however, also cold, dark and generally wet, does have a certain little event and ensuing holiday to help get through the long dark days. Christmas (in case you didn’t realise).

Given that Christmas occurs in December it is a long struggle through the winter for us Southern Hemmers.

So, to try and make it slightly more bareable, Australia does ‘Christmas in July’ instead. There are all sorts of special events on in and around the city and cool (ha) things for families to do to help get through the chilly winter.

As part of the Christmas in July celebrations we headed over to Sovereign Hill in Ballarat, about an hour and 15 mins drive from Melbs, to take in the entertainment that was on offer as part of their celebrations.

Sovereign Hill is an awesome outside museum. It is set up as a turn of the Century gold rush town and you can even pan for gold in the river running through the town.

It is a great day out even if it wasn’t Christmas in July and I’d highly recommend it. I’ve been there once before when the Bear was v small when my broseph came to stay and it’s pretty cool.

This time we headed there a bit later in the day because:-

A) it was raining

B) it was freezing

C) we couldn’t be bothered to get up early

Plus as we knew we’d be there late for the festivities we didn’t want to peak too early!

When we arrived, Sovereign Hill was like a scene from a Charles Dickens novel.

There were Christmas decorations and wreaths on the buildings in the Main Street and a pretty impressive Christmas tree. 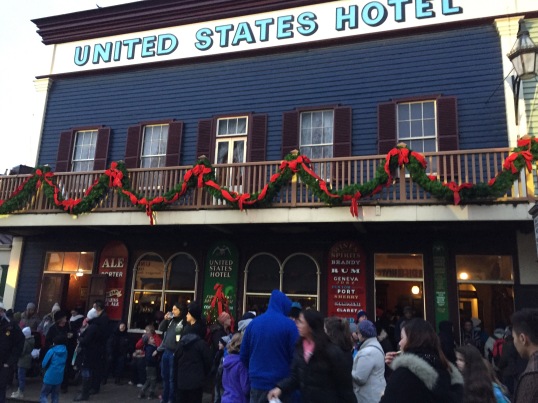 There was so much to do besides the panning for gold stuff, there were horse and carriage rides and a Christmas sack race as well as a very funny ‘Captain Black Beard and the Pirates’ pantomime. The Bear’s loved it. 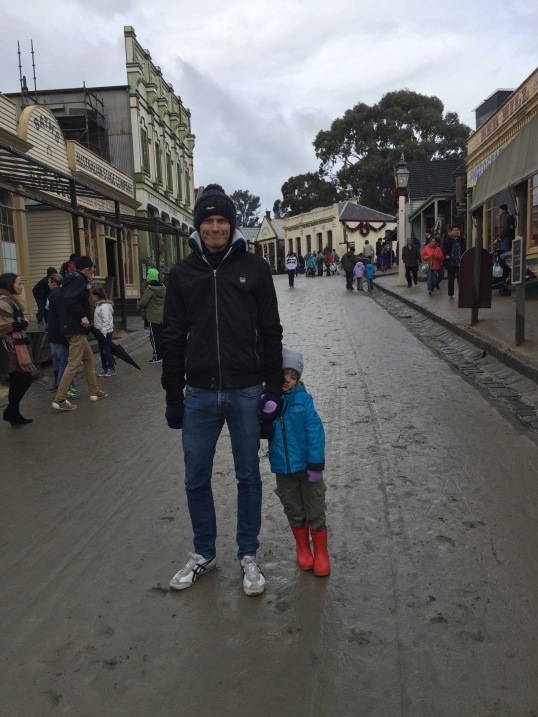 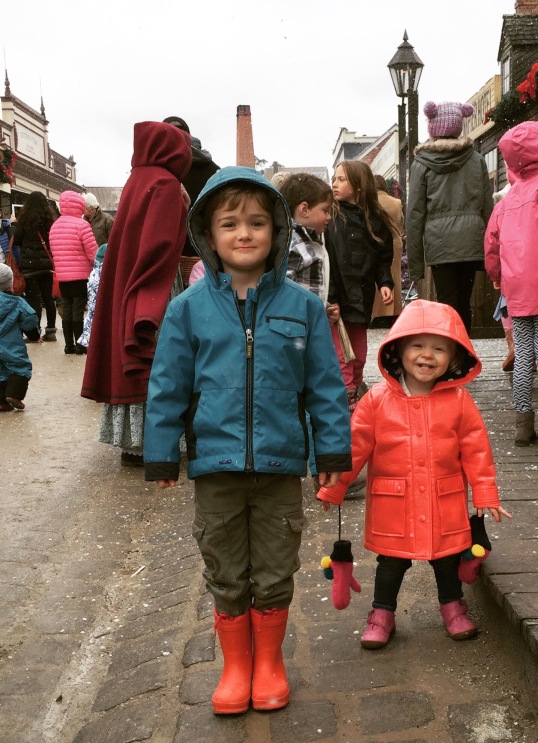 When darkness fell the light show began and the Main Street was transformed into a Christmas wonderland complete with lights, snow, Christmas carols and, of course, St Nicholas. 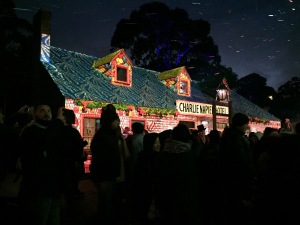 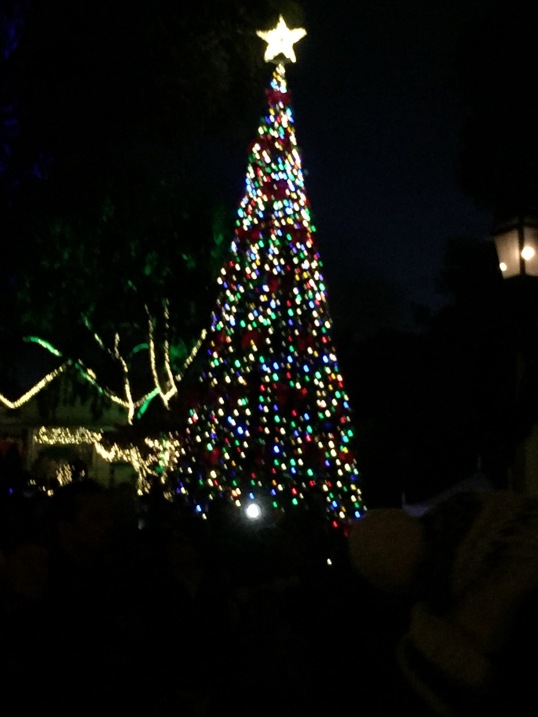 It might not actually be Christmas but it certainly felt like the festive season even just for a day!